During 2018, Åbo Akademi University celebrated its 100th anniversary with the theme ‘Knowledge – past, present and future’.  The jubilee year was officially closed at the Toward the Future event arranged on Friday, 14 December in Vaasa, where the baton was passed on to the student union, Åbo Akademis Studentkår, which will celebrate its centenary in 2019. 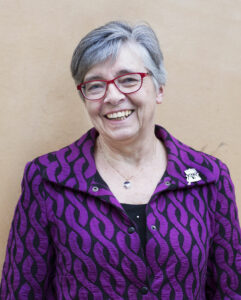 Chancellor of Åbo Akademi University Ulrika Wolf-Knuts was responsible for the programme of the jubilee year.

“Our aim was to engage, along with the personnel and students, the public, alumni and co-operative partners to take part in the celebrations. We managed to achieve the goal and the ÅAU100 year truly included all groups. It has been a successful centenary, with both fun events and more dignified occasions suitable for a 100-year-old”, says Wolf-Knuts.

The centenary was celebrated both in Turku and Vaasa, and in addition, an alumni reunion was arranged in Helsinki and ÅAU contributed to the SuomiAreena forum in Pori.

“We had plenty of different events ranging from more internal ones for the personnel and students or invited guests to events that were open to the public. The public events attracted large audiences, which can be seen as evidence of people being interested in ÅAU. It makes me happy that so many individuals wanted to participate. In summer, for example, we had to arrange additional guided campus tours in Finnish because there were so many interested”, explains Wolf-Knuts.

Among the various popular events were, for example, the Lights on ÅAU outdoor event in January, the open house events in the Turku and Vaasa campuses in April and December, respectively, and the guided Turku campus tours in Swedish, Finnish and English in summer. The seminar entitled Imagine!, with the former President of Finland Tarja Halonen among the panellists, dealt with the future of education.

“All in all, we reached excellent visibility in Turku, much thanks to the City of Turku. The City gave us a fine birthday present by providing advertising space and by illuminating the Library Bridge with the colours of ÅAU on the same day we had the Imagine! seminar”.

A donation of 1 million euros for a professorship in marine and aquatic research was the actual centennial gift given by the City of Turku to Åbo Akademi University.

“It’s great that the City of Turku shows us such appreciation. We are much obliged and grateful!”

In addition to the larger, centrally arranged events, the ÅAU faculties and other groups contributed to the overall programme.

“On behalf of ÅAU, I wish to thank all those who made this eventful year an unforgettable one, who contributed to the programme and who in other ways participated in the celebration”, says Wolf-Knuts.

In the honour of the ÅAU 100 jubilee year, Ulf Långbacka composed a jubilee cantata, Undrans mosaik, which was premiered in the Holy Trinity Church of Vaasa in March. At the start of the year, a history was published in two volumes: Åbo Akademi och samhället. Perspektiv på växelverkan mellan samhällsförändring och universitet, 1918–2018 (Åbo Akademi University and society. Perspectives into the interaction between societal change and the university, 1918–2018) and Åbo Akademi och kunskapen. Perspektiv på villkoren för skapandet av vetenskap, 1918–2018 (Åbo Akademi University and knowledge. Perspectives into the prerequisites of scientific creation, 1918–2018).

For the jubilee year, ÅAU also received a beer of its own, Chancellor’s Centennial Pils. The recipe was developed by Professor of Biochemistry Mark S. Johnson and his students. The beer has received good reviews and also sold well.

Photos from the jubilee year: http://web.abo.fi/pressmaterial/jubileumsaret/

Read more about the history of Åbo Akademi University: https://www.abo.fi/en/history-of-abo-akademi-university/