FRANET was established in 2011 for the purpose of data collection and research services on fundamental rights issues. Within the FRANET network, the contractors deliver various thematic reports and monthly-bulletins with respect to specific fundamental rights issues in each EU country concerned. The national FRANET teams also contribute to the annual Fundamental Rights Report compiled by FRA. As from 2019 the Institute for Human Rights at Åbo Akademi University and the Faculty of Law at the University of Turku form the national focal point of FRANET. Between 2011-2018 the Institute for Human Rights cooperated with the Finnish League for Human Rights within the FRANET network. Below is a selection of some of the most recent FRA reports which the Finnish FRANET team has contributed to. 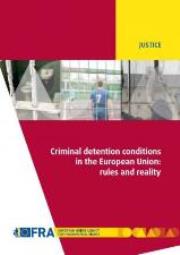 Criminal Detention in the EU (December 2019)

The European Commission asked FRA to compile information on prison conditions and monitoring across all EU Member States to assist judicial authorities when deciding on transferring detainees to another EU Member State. The Criminal detention conditions in the European Union: rules and reality report was published in December 2019. It outlines selected minimum standards at international and European levels, and how they translate into national laws. FRA used reports from national monitoring bodies and interviews from previous research to illustrate how detention conditions vary across the Member States.

FRA’s new online criminal detention database complements the report. The database contains national standards, laws and monitoring reports on detention conditions from across the EU as well as country studies prepared by the national FRANET teams. 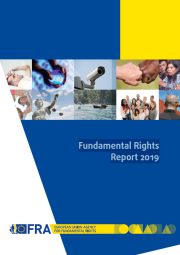 The Fundamental Rights Report 2019 explores the main developments of 2018 in the protection of fundamental rights in the EU Member States, particularly in the following areas: equality and non-discrimination; racism, xenophobia and related intolerance; Roma integration; asylum, borders and migration; information society, privacy and data protection; rights of the child; access to justice; implementation of the United Nations Convention on the Rights of Persons with Disabilities; and the role and usage of the EU Charter of Fundamental Rights at national level. Some of the key issues of concern identified in the report include the need for further measures to reduce child poverty; national action to fight racism and racial discrimination; and respect for EU asylum law and human rights in the context of asylum and return procedures. This year’s report also dedicates its focus chapter to the interrelationship between human rights and Sustainable Development Goals (SDGs) in the context of Member States’ and the EU’s internal policies and takes a closer look at the SDGs related to reducing inequality and promoting peace, justice and strong institutions.

The report provides a comparative overview of the application of some of the rights deriving from EU citizenship, in particular the right to move and reside freely in other Member States, the right not to be discriminated on the basis of nationality and the right to vote and stand as a candidate in municipal and European Parliament elections. Based on a review and analysis of select case law of national courts, the report shows how courts in different countries vary in the interpretation of the key EU provisions regulating EU citizens’ rights. These include the definition of a family member, sufficient resources, or when they can receive benefit. This can affect people’s everyday life, their family, career and well-being. FRA’s research covered all 28 EU Member States. FRA’s inter-disciplinary research network FRANET collected the case law between February and June of 2017.

EU Member States, and the EU itself have ratified the Convention on the Rights of Persons with Disabilities, committing themselves to achieving independent living for persons with disabilities. Doing so requires a meaningful and sustainable shift from institutional to community-based living arrangements. This publication summarises the findings from the three FRA reports, published in October 2017, focusing on three important factors in making deinstitutionalisation a reality: commitments and structure, budgeting and financing, and measuring outcomes for persons with disabilities.