The tradition of conferment

The conferment ceremony can trace its roots back to the earliest universities in Europe. Åbo Akademi University has retained a number of the conferment traditions from the Royal Academy of Turku (founded in 1640).

The conferment ritual at Åbo Akademi University consists of the act of conferment itself, a ceremonial procession, conferral service and banquet. The conferrers speak Latin when greeting the promovendi and presenting the insignia. The sceptres, which symbolise the legal freedom of the seat of learning, are carried at the front of the procession.

In earlier times, conferment also had legal significance. Today, the ceremony is primarily symbolic, with each Doctor choosing whether he or she wants to participate in it.

Åbo Akademi University has conferred Honorary Doctor degrees at every conferment ceremony since 1927. A list of the Honorary Doctors can be found here:

The doctoral hat symbolises academic freedom. Although the colour of the hat varies according to the university and faculty, all of the hat models used at Åbo Akademi University are black. The brim is flat, except for the Doctor of Science (Technology) hat, which is folded up on the sides. All hats are adorned with a lyre emblem except the Doctor of Theology hat, which has a ribbon.

Honorary Doctorates are conferred upon persons by faculties in recognition of their scientific achievements or their contributions to the university or society.

Insignia are the outward signs of the degree. All promovendi at Åbo Akademi University receive a doctoral hat and a diploma. The hat model and lyre emblem (or lack thereof) vary according to the academic field in question. Some degrees also come with other insignia: a doctoral sword or an embroidered collar/brooch.

The title of Jubilee Doctor is conferred upon persons who earned their doctoral degrees 50 years ago. 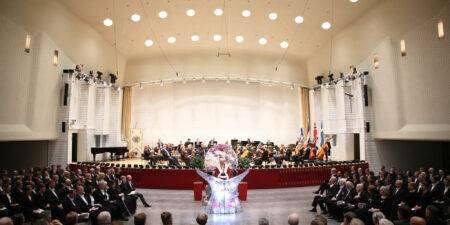 Åbo Akademi University arranged a doctoral conferral ceremony on May 25, 2018. This year 91 persons were conferred.